I’m writing this as I sit here in L.A, enroute to Sydney after yet another journey around the world, and I can’t help but reflect upon some words of wisdom that I have taken away from conversations had with people I’ve met along the way, and to be honest I use the term ‘met’ loosely.

See, I’m talking about those random people that you share a chair lift or gondola with for those 8 to 15 minutes when you’re ripping around a ski field. Strangers, who you no doubt share a common interest with, but otherwise would never have spoken to.

When getting on a chair lift, or into a gondola, you never know the kind of person you’ll be sharing it with. Sometimes there are the stoners, who ask ‘Do you mind if we take a hit’ and end up turning your gondola into a hot box. There are the veteran ski gents, who have retired to the slopes and are all too happy to tell you the history of the valley, well before it was an international ski destination. Then, every now and then you meet people who share their insights into a way of life that you live for, and reinforces your belief that you can live a life, where you aren’t a slave to the dollar, where experiences and actually living your life are more valuable than the figures in your bank account.

In the USA, it’s seems that this last kind of person is a rarity. Most people I chatted to almost fell out of their chair when i told them we’ve been away from home for 6 weeks (in one stint).

‘Vacation time’ in the USA is limited to 2 weeks a year MAX if you’re lucky. It seems to be engrained in them that work and status is the most important thing, and meeting these kinds of people truly made me grateful that I have engeniered a life that gives me the freedom to travel.

There were however some exceptions to the rule.

We met one guy in Breckenridge, Colorado who was a sprightly 51 year old, who had traded the high life in New York and an ex wife (who was snorting half his net wealth up her nose), for a life in the mountains. 10 years ago, he sold it all, and bought a place in Colorado, where he now lives the true life of his dreams…. Learning to snowboard and riding everyday. When chatting to him, he made the comment, ‘Why work your ass off, and wait for retirement? Why not just live the life you dream of now? You might never make it to retirement!’ and that to me, is the definition of living in the moment and following your heart.

Another guy we met was between jobs, and despite having a job offer waiting for him in New York, he knew deep down that he belonged in the mountains. He was living in a hotel, with a seasons pass and a snowboard. Riding all day, and just trying to figure things out. Yes, this could be perceived as though he’s wasting his time, being indulgent and not really getting anywhere in life, but personally I’d rather see someone being true to themselves, than living a life that is for material gain, just for the sake of it. What a waste!

Then, there was a family where Mum & Dad had pulled the kids out of school because it was a bluebird ski day (and the little one’s birthday), making the remark that giving the kids fun and adventurous memories to look back on was more important to them, than one day at school with their heads in a lap top. (Funnily this guy had also travelled the world, so it seems that the more they’d themselves experienced a life less ordinary, the more they were prepared to show their kids one too).

Lastly and probably the ultimate lifestyle bandits, were a hubby and wife team who live 6 months of the year in Colorado and 6 months in the UK! They trade the dreary English winters for the slopes, and return when the snow melts. They’ve set up a life where they have the flexibility to live in two different places throughout the year, giving them freedom and joy by positioning themselves in a place that they can do what they love… SKI!! Now that is inspiring.

Sometimes you get on a chairlift and there is nothing but silence. Someone who just doesn’t want to chat, and that’s ok too. But for the people that we did talk to, I feel like either we were able to give them a little insight into a way of life, unlike anything they have had the courage to experience, or for the people who were already living their life the way they truly wanted, hats off to them! They are the true inspiration.

So, the moral of the story? Take a chance and start a conversation with strangers when you’re next on a chairlift or in a Gondola. You never know the kind of person you’ll meet, and there are so many people out there, who are truly living some incredible lives. Maybe they’ll inspire something in you…. and living a life like that can’t be anything less than amazing! 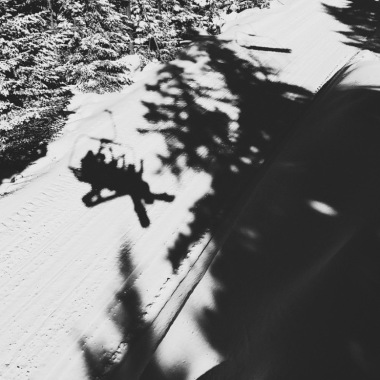 2 thoughts on “DO talk to strangers… Especially on a chair lift!!”